October 17th, 2018 was a day I would never forget. At the risk of sounding overly dramatic, October 17th was the worst day of my life.

I was 6 months pregnant with our first baby and had just been referred to Mount Sinai hospital’s High Risk Pregnancy Program because a technician noticed something odd on one of my ultrasounds. We had been told that our baby had enlarged ventricles in it’s brain – we had no idea what that meant – but hoped for the best news possible. When we arrived, I remember going to the washroom, looking in the mirror, and asking God to please give us results that wouldn’t leave us feeling hopeless. A couple of hours later, we were faced with the worst news: our baby’s brain hadn’t developed properly and we were told that I should have miscarried, but because I didn’t yet, it could still happen. If it didn’t happen, our baby would probably be a stillborn, and if not a stillborn, our baby would be faced with life threatening challenges and most likely would not survive infancy. We were asked if we wanted to ‘interrupt the pregnancy’, which we both quickly declined. At that point they arranged that we would be followed by the High Risk Pregnancy Program very closely and basically take things one day at a time. Lawren and I walked out of that office more shocked than we’d ever been in our lives. We didn’t know what to say, think or do. We felt hopeless and utterly in despair. We had friends and family praying for that appointment, and we were now going to have to retell the awful news we had just been given.

That day marked the beginning of a journey that neither of us ever imagined our life would look like. A journey that our sovereign God knew and knows so intricately well. A journey that we learned we wouldn’t have to go through alone. This is our journey of hope in the midst of what should have been a hopeless situation.

And now, I sit here staring at my baby girl, Hope, truly knowing that God is walking with us and holding us in the palm of His hands. 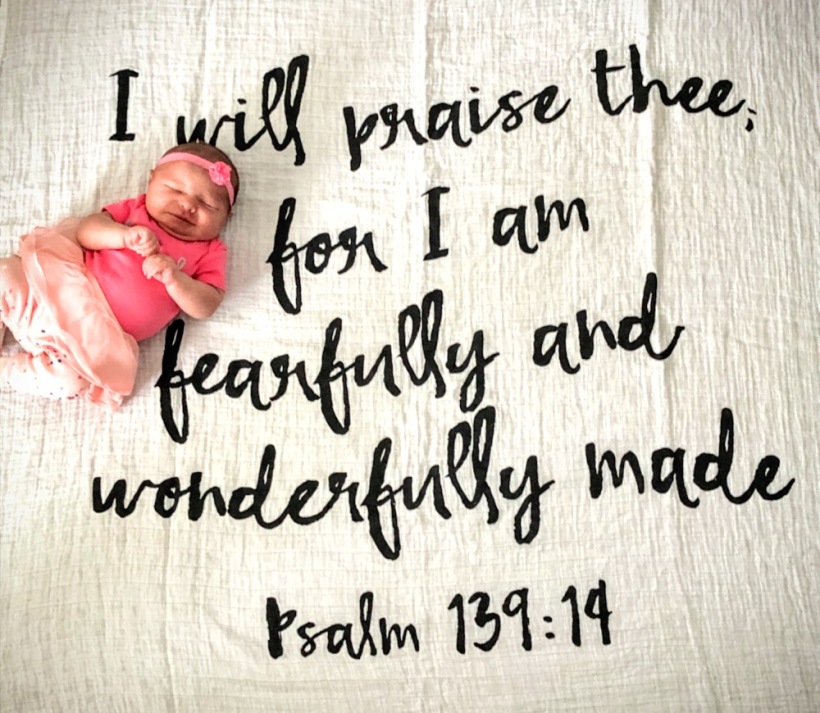 Hope: “Hope is the confident expectation of what God has promised and it’s strength is in His faithfulness. To trust in, wait for, look for.”

Sara: “The LORD said to Abraham, ‘Why did Sarah laugh and say ‘Shall I indeed bear a child, now that I am old?’ Is anything too hard for the Lord?‘ ”

We know the future will have it’s challenges, but we also know that we serve a God who will equip us with the grace to go through each one of those challenges – He has already proven that He has! Yes, Hope has abnormalities in her brain, eyes and spine, but out of all of the things the doctors told us, Hope has already proven to be a miracle. We were prepared for the absolute worst.

We were told that “babies like her” would come early – she was a week late.

We were told that she most likely had Trisomy 13 (a fatal genetic condition) – she tested negative.

We were told that she would be in distress during labour and delivery – I was in labour for 29 hours, and my delivery was insane – the nurse told us that she had never seen a more steady heart beat the entire time.

We were told that she would most likely need to be resuscitated and have problems breathing so I delivered in the OR next to the resuscitation room – She came out breathing on her own and had not needed any help with breathing while in the NICU.

We were told she would most likely not have a sucking reflex – and this girl eats like a champ.

All this to say, we greatly respect the doctors that we had. We were watched and followed by the smartest of the bunch. We would listen to what they would say, but we tried our best not to put our hope in their words. We followed their instructions, but we earnestly sought the Lord with each and every detail – pleading with Him to show us His miraculous hand throughout this journey. He has. He has been so gracious and kind. He has been so near and been our very present help in this time of trouble.

This is our journey of hope, for Hope – we hope you will be encouraged as you walk with us.

This site uses Akismet to reduce spam. Learn how your comment data is processed.